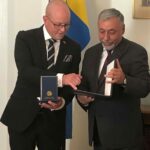 MKHITAR GOSH Björn Söder’s speech on the 19th of July 2021 at the reception in celebration of the awarding of the Mkhitar Gosh Medal by the President of the Republic of Armenia, to him.

I am deeply honoured and touched by the decision of his Excellency the President of the Republic of Armenia to award me this medal and recognition.

When Alexander told me about this medal when we had a barbeque at his residence in May I was really touched. And I still wonder if I really deserve this award. The reason of that is because I have only done what I think is the right thing to do.

My parents, who are here today, taught me early on how to act, to see and recognize what is wrong and what is right and this has been my guideline through life and perhaps the reason I decided to involve myself with politics. If you identify things you believe are wrong you can choose to stay on the sideline or you can get involved to do something about it – to make them right.

My engagement for Armenia and the Armenian people is relatively new. I recall March 11, 2010 when the Swedish parliament decided to recognize the genocide of 1915. It was the first time I came in contact with the atrocities that occurred to the Armenian people. I was not yet a member of parliament, nor was my party yet represented. But I do recall us sending out a press release stating that we welcomed the decision to recognize the genocide.

The reason I had no prior knowledge of the genocide, or Armenia as a whole, must be blamed on the Swedish school system. To me, Armenia was nothing more than a previous Soviet Union republic, and I do remember the news from the 1990’s regarding the war between Armenia and Azerbaijan, but that was the extent of my knowledge.

When I was elected as second Deputy Speaker following the 2014 election, Armenia’s then ambassador Artak Apitonian was among the first ambassadors to schedule a meeting. As other ambassadors surely dreaded the various romurs about my party, Artak chose to see me and to form an own and independent opinion. We have since become close friends and I hold Artak in very high regard.

The meeting with Artak became a starting point for my engagement with Armenia and the Armenian people of which I subsequently fell in love with.

One of my official trips in my capacity as the Deputy Speaker I visited Armenia and Yerevan in 2018 making me the first official foreign dignitary to visit following the Velvet revolution. The revolution became a starting point for Armenia and introduced possibilities to reform the systems within the country. During my visit I gave praise also to the losing side in the revolution for showing a democratic maturity by accepting the will of the people.

Then vice speaker Eduard Sharmazanov suggested during the visit that the Swedish parliament should organize an exhibit regarding the genocide of 1915 and the Scandinavian response. I embraced to idea and upon coming home I immediately started planning and pushing for the exhibit. I want to extend a warm thank you to the Union of Armenian Associations in Sweden for assisting with materials for the exhibit which quite a number of members of parliament decided to attend. Surely much knowledge was gained through the exhibit.

During this time I also worked diligently for the Swedish missionary Alma Johansson to be awarded a place in the ”Room of good deeds” in the parliament. Through proposals I tried to make this happen and when I heard of that there was an established group to change the room, I immediately joined to affect change. It was a success! Alma Johansson now has a place in the room and each year thousands of students pass through, enabling them during their education to learn more about the genocide than I had the opportunity to.

More work remains regarding the school curriculums and it’s a fight that continues in parliament.

Last autumn many of us watched in horror how Azerbaijan with the support of Turkey attacked Nagorno-Karabakh and Armenia. Equally shocking to me was the apathy of the world who passively watched recurring assaults happen repeatedly. It is no exaggeration to say that the attackers tried to finish what they started in 1915. And then, as now, the world stood silent, with few exceptions.

In the parliament a few of us continuously attempted to bring focus to the situation and to get Sweden, together with the rest of the world, to act. I can only express embarrassment in how lame Sweden, not only the government but several other parties as well, have responded in this most difficult situation.

For example, I attempted to actualize a joint statement from the Foreign Affairs Committee to without delay enforce a truce among all affected parties and return to negotiations in the framework of the OSCE Minsk Group, simultaneously condemning Azerbaijan’s armed aggressions towards Armenia and Nagorno-Karabakh, and Turkey’s fuelling the conflict.

The other parties opted to not even respond to my request. Nor have we seen the government apply enough measures whatsoever within the realm of the chairmanship of the OSCE. Apparently to do the right thing is not easy for a lot of people. But we have to keep pushing forward. There are no other options.

It feels in the heart when you do the right thing. To stand up for Armenia and the Armenian people is the right thing to do. I can feel it. In my heart.

But despite how the Swedish government has acted – or not acted – and despite the lack of strong support from the parliament during the conflict last year there are some positive things to be mentioned.

Through our friendship group we try to strengthen the ties within the interparliamentarian cooperation and we have a trip planned longer than a year back, then unfortunately the pandemic came, and the war, but we will make another attempt this autumn.

It also pleases me that the cooperations between Swedish and Armenian authorities continue to deepen. Just a few weeks ago the friendship group met with The Swedish National Audit Office discussing how we, parliamentarians, can engage in the NAO’s cooperation with the Armenian counterpart. I also view our current ambassador Patrik Svensson in Yerevan in leading the Swedish embassy as an active and driven man. I believe there are many mutually beneficial areas of cooperation between our two countries. Particularly within the Eastern Partnership. It feels like we are only just in the beginning of all possibilities.

In closing I also want to turn to ambassador Alexander, whom I also consider a friend for life. I thank you for our close cooperation and for the friendship you have provided. I wish to continue working with you and your fine colleagues at the embassy, who I consider family.

I will continue fighting for Armenia and the Armenian people. I prioritize for the Swedish government to adhere to the decision of our parliament recognize the Armenian genocide of 1915, and also that this tragic event becomes part of the mandatory curriculum within the Swedish schoolsystem.

Thank you once again! 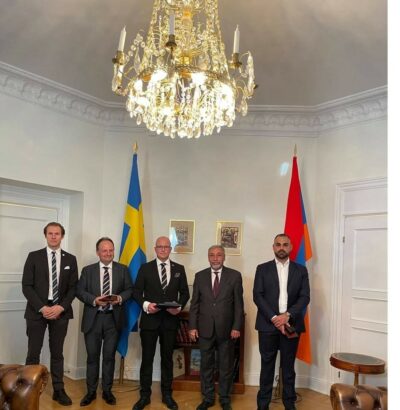 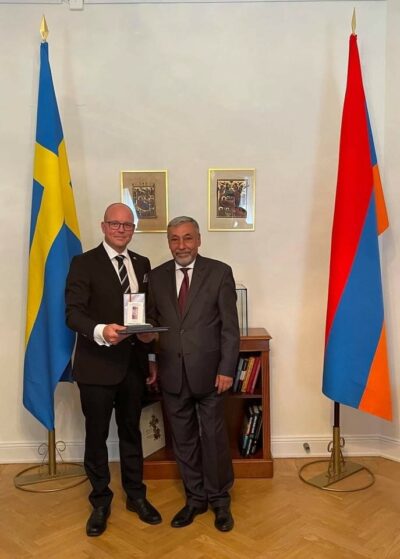 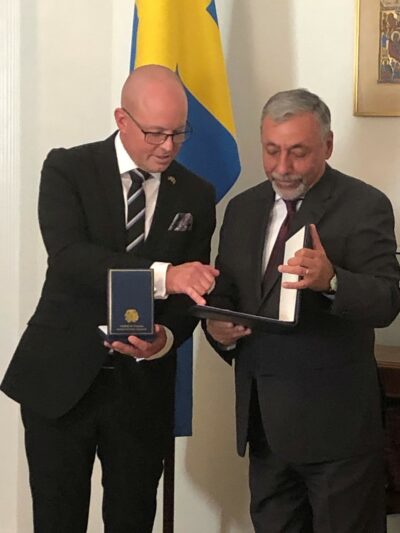 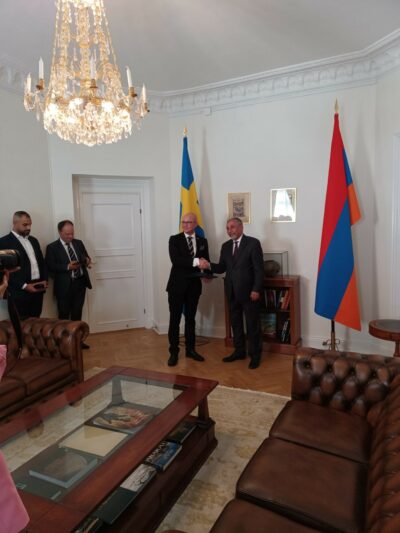 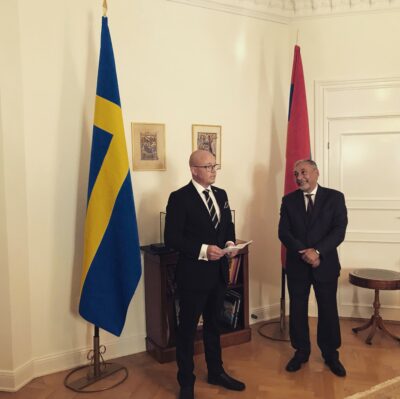 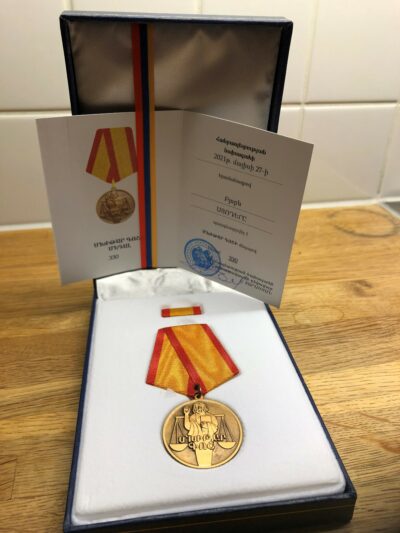 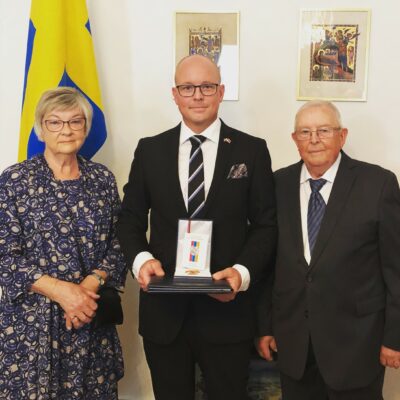