Vandalization of graves in Belarus 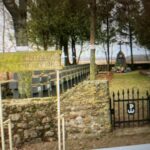 BELARUS/POLAND In July and August, 2022, a number of Polish memorials and gravesites were desecrated and vandalized by “unknown perpetrators”. These actions coincide with an increase in anti-Polish media campaigns in Belarus. The graves, belonging to Polish resistance fighters during World War II are a part of the Polish cultural heritage, a heritage the Belarusian regime don’t want to acknowledge.

Poland, a country wedged between the two superpowers of Germany and Russia has throughout history fought tooth and nail for the survival, not only of their country, but also of their culture.
Invasions have come from the across the Baltic Sea, from the west, from the east and from the south. And yet, today, Poland and the polish culture remains.

The struggle for their national survival has come at a heavy cost however. Poland lost over 5 million of its citizens during the second world war, equalling nearly 18 percent of the country’s total population.
Many Polish resistance fighters died in what is now Belarus. Defending not only their own country, but also the culture they had fought, and lost so much to keep during the earlier wars. These sites house the bodies of brave men and women who fought against overwhelming odds, and for this, they have been remembered as heroes.

Poland knows what resistance looks like, what it feels like, and the sacrifices that it requires. Perhaps that is why Poland, more than any other country in the west have stood up for Ukraine during the illegal invasion from Russia. Poland has taken in immeasurable numbers of refugees, they have sent weapons, equipment and humanitarian aid. Not only are Ukraine, and Poland defending themselves from Russia, but also the whole of Europe and the free world.

The graves of the Polish servicemen in Belarus serve as a reminder of how hard the country had to fight for their freedom, and now it seems, another country may want to remove those memories.

In recent months, more and more information has come out of the Russian puppet country of Belarus regarding the desecration and destruction of these gravesites. So far, and as far as we know, seven cases of destruction and vandalism have occurred, Plabanishki, Yodkavichy, Volkovysk, Mikulishki, Strievka, Surkanty and Piaskivtsi.

There is no given reason as to why these sites have been destroyed. The most obvious one however, is that many of the people buried here fought against communism and Russia.

The Belarusian authorities have an obligation to protect these sites, however their non-compliance with this obligation and their ignorance of Polish requests to investigate shows how little the regime in Belarus cares for the memories of resistance fighters. Perhaps obvious considering the recent protests Lukashenko has faced within his own country.

The Organization for Security and Co-operation in Europe (OSCE) and the parliamentary assembly of said organization (OSCE-PA), as the name suggests, work for the co-operation between the participating states. Even now, with Russia’s illegal, and abhorrent invasion of Ukraine, parliamentarians gather in order to try to work for peace within the region and Ukraine. The OSCE-PA has also signed resolutions on protecting cultural sites, monuments and cemeteries. The Baku final declaration of 2014, points to the protection of cultural property in the OSCE area. A declaration that was passed by all member states of the OSCE, including Belarus.

The Polish people have protected Europe from authoritarianism, Ukraine is doing it as we speak. In their fights however, countless people have, and will regrettably die. I therefore urge all countries of the world to continue their support for Ukraine, but I also urge the same countries to condemn the illegal actions of Belarus corrupt regime.

The graves being destroyed acts as memories of what Poland has sacrificed in order to become what they, and in conjunction, we are today. Democratic, independent and free.

BJÖRN SÖDER
Head of the Swedish delegation to the OSCE-PA

MARKUS WIECHEL
Head of the Swedish delegation to the PACE

ALEXANDER CHRISTIANSSON
Member of the Swedish delegation to the PACE

(The article is published in Polish on wPolityce.pl on the 17th of January 2023)