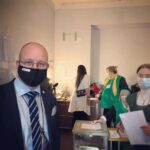 GEORGIEN Supporting democratic development in the European neighbourhood and around the world is essential if we are to continue the expansion of freedom that has characterized much of the past half-century in Europe. The European Union is committed to this, as is the OSCE, the Organization for Security and Co-operation in Europe, and the Council of Europe, and it is the reason that I and many other legislators from across Europe participate in election monitoring missions.

The former President of Georgia, Mikheil Saakashvili, has made some false claims in the media about the role of these organizations and their election monitoring missions that require rebuttal. I was a member of the OSCE Parliamentary Assembly election monitoring delegation to Georgia in October that helped to oversee and monitor the first round of the Georgian Parliamentary elections, as were many of my colleagues from the Council of Europe.

Saakashvili’s theory that Russia was somehow involved in, and directing these missions, is false and offensive to all Parliamentarians who commit our energy in support of the democratic processes across Europe. These comments display an authoritarian mindset and anti-European approach from Saakashvili and his UNM party, a long-time and current member of the EPP.

As you all know well, both OSCE and Council of Europe monitoring missions are non-partisan: our members are conservatives, socialists, liberals and everything in between. Our missions to Georgia assessed on-the-ground election processes, as well as drawing on available election data, analysis of the media environment, and other relevant factors. The final assessment was based on these factors – democracy, in other words, and nothing to do with politics.

The Georgian elections were not perfect – there were some low-level signs of corruption, for example, and not all processes were fully followed – but overall the election process was conducting fairly and democratically and there should be no doubt about the result.

The NATO Parliamentary Assembly, as well as independent election monitors, who also travelled to Georgia, came to similar conclusions. The OSCE and the Council of Europe are respected and long-established international institutions. Attacks against their integrity by Saakashvili are totally groundless and totally unacceptable. They create a very negative precedent in our democratic processes that we must not allow to hold ground.

It demonstrates a worrying anti-democratic streak that Saakashvili is not prepared to accept the verdict of the Georgian people. Worse, he resorts to hurling insults and wild accusations at any institution that confirms the fact of the election result. It is irresponsible and crass to accuse European legislators of being in league with the Kremlin and Saakashvili should withdraw and apologise immediately.

It is very clear what needs to happen, now. A peaceful and democratic transition should take place in Georgia to the new Parliament and the new government. That is happening. The country, like so many, has serious challenges to address – not least the ongoing COVID pandemic – and it needs a functioning Parliament. The international community, including election monitoring missions, accepts the election result. The opposition parties must now do so and move forward constructively: including not boycotting the second round of the elections which is a deliberate attempt to impede the proper functioning of the democratic process.

If Saakashvili cannot do this and prefers to throw anti-European insults via the media, then perhaps he should not be part of that constructive future. It is my sincere hope that his comments will not influence Georgians, who can be proud of their commitment to democracy, and to a European future.

BJÖRN SÖDER (SD)
Member of the Swedish Parliament and former Second Deputy Speaker of the Riksdag. Sweden Member of the Parliamentary Assembly of the Organization for Security and Co-operation in Europe

Björn Söder2022/07/02 @ 10:17
These are the indicative estimates of Russia’s combat losses as of July 3, according to the Armed Forces of Ukraine.