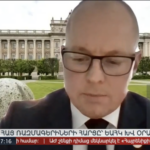 Statement by Mr Björn Söder at the Winter Meeting 2021 of the OSCE Parliamentary Assembly 26 February 2021.

On the 27th of September Azerbaijan attacked Nagorno-Karabakh and Armenia. There is no uncertainty that the attack was carefully planned. For quite some time, Azerbaijan has conducted a process of rearmament with large purchases of military equipment from predominantly Turkey and Turkey has further left the country fighter jets after joint military exercises. During the attack, Turkish forces and hired ISIS-terrorists from Syria participated in the fighting.

The conflict escalated quickly and the rest of the world stood by and watched when war crime after war crime was committed. There are numerous witness accounts and evidence that show deliberated targeting from the Azerbaijanis on hospitals, schools, residential areas and other objects not of military nature, with civilian causalities as a result. Azerbaijani forces have conducted extrajudicial executions of captured Armenian forces and have encouraged foreign Islamic terrorists to decapitate Armenian soldiers. Moreover, there has been systematic destruction of Armenian relics as a method to erase the ancient Armenian culture in the area.

The actions of Azerbaijan, backed by Turkey, constitute grave breaches of many fundamental principles in international law. These actions have to a large degree been met with silence. Sadly, and in a similar way as when the Young Turks tried to obliterate Armenia and its people during the 1915 genocide, the world stood once again by and watched as a new attempt was made.

The people responsible for these crimes must be charged with crimes against international law.

On the 10th of November a ceasefire agreement was signed between the fighting parties. Behind this agreement was Russia who had brokered a deal with Turkey. As in 1921, when Moscow decided that Nagorno-Karabakh should fall to Azerbaijan, we see history repeating itself.

We can conclude that both Russia and Tukey has used Armenia and Azerbaijan as pawns in their grander ambitions and successfully outmanoeuvred the OSCE Minsk group as a forum for conflict resolution.

I am worried about the destructive policy of Azerbaijan to politicise humanitarian issues and their blockade of international relief efforts, including the UN, to reach Nagorno-Karabakh, which hinders the possibility to give the people in the area humanitarian aid.

I urge Azerbaijan to push for a quick exchange of dead bodies, prisoners of war and hostages, and to immediately cease extrajudicial actions against them and make sure their safe return to Armenia.

If there will be any chance, whatsoever, to rebuild some form of trust between the two states, there must be a swift and unconditional release and return of prisoners.

Moreover, we must work to re-activate the OSCE Minsk group as a relevant party in the conflict resolution process in order to create a long-term sustainable solution to the crisis.